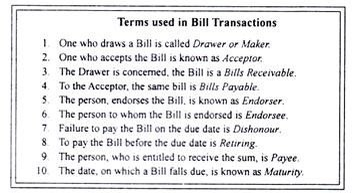 Discounting the Bill:
Illustration 2:
A
accepted a four months’ draft for Rs 1,000 drawn on him by B on 15th
April. The Bill was discounted with the bankers on the next day at 12%.
On maturity the Bill was met. Make journal entries in the books of A and
B.

Endorsing the Bill:
On
1st June Ram drew a bill upon Krishna for Rs 500 at four months date.
This was duly accepted and payable at Canada Bank. After the acceptance,
the Bill was endorsed to Gopal. On the due date, the Bill was honoured.
Pass the journal entries in the books of all parties. 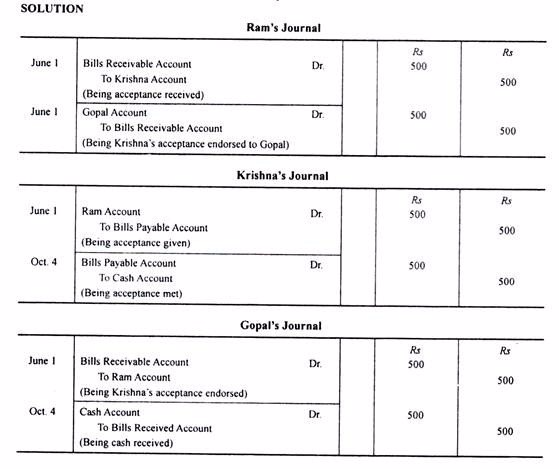 Dishonouring the Bill:
(a) When Drawer is the Holder of the Bill:
Illustration 4:
Mr.
Ravi draws a Bill for Rs 2,000 on Gopal on 15th September for three
months. On maturity, Gopal failed to honour the Bill. Pass the necessary
journal entries in the books of Ravi and Goipal, if he had retained the
Bill with him till maturity. (Calicut)

(b) When Banker is the Holder of the Bill:
On
15th June, Niranjan sold goods to Prema, valued at Rs 2,000. He drew a
Bill at 3 months for the amount and discounted the same with his bankers
at Rs 1,960. On the due date, the Bill was dishonoured and Niranjan
paid the bank the amount due plus the noting charges of Rs 10. Pass the
journal entries in the books of the two parties. (B.Com Mysore) 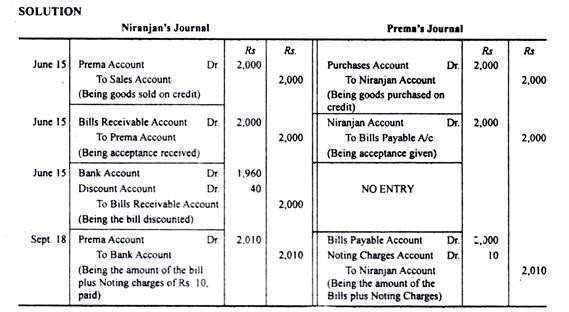 (c) When Endorse is the Holder of the Bill:
On
1st January, A drew a Bill on B for Rs 1,000 payable after three
months. B accepted the bill and returned it to A. After 10 days A
endorsed the Bill to his Creditor C.
On
the due date, the Bill was dishonoured and C paid Rs 5 as noting
charges. Record the transactions in the journals of A, B and C. 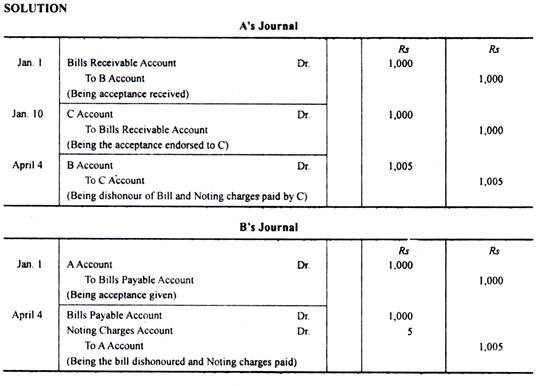 (d) When the Bill is Sent for Collection:
Illustration 6:
On
1st January, A drew a bill on B for Rs 1,000, payable after three
months. Immediately after its acceptance, A sent the Bill to his Bank
for collection. On the due date, the Bill was dishonoured.
Record the transactions in the journals of A and B.

Renewal of the Bills:
Illustration 7:
On
1st May, Merchant & Company sold goods to A B & Co. for Rs 500
and drew upon him a Bill at three months for the amount. A B & Co.
accepted the draft and returned to Merchant & Co. On the due date A B
& Co. expressed their inability to meet the Bill and offered Rs 300
in cash and to accept a new bill for the balance plus interest at 12%
p.a. for three months. Merchant & Co. agreed to the proposal. On
maturity, the bill was duly met by A B & Co.
Pass entries in the books of the parties to record the above transactions. (B. Com., Karnataka, Madras)
Solution: 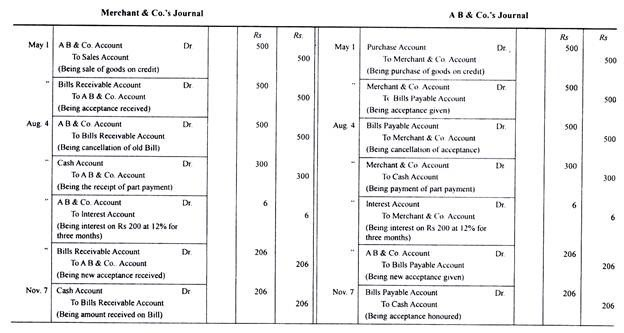 Effects of Dishonour of a Bill:
Retiring a Bill under Rebate:
Illustration 8:
On
1st January, A sold goods to B for Rs 1,000 and drew upon him a Bill at
three months for the amount. B accepted the Bill and returned it to A.
On 4th March, B returned the Bill under rebate of 12% p a.
Record these transactions in the journals of A and B.

Illustration 9:
On
1st February, Ram received from Hari three acceptances for Rs 6,000, Rs
8,000 and Rs 10,000 for two months.The first Bill for Rs 6,000 was
endorsed to Mohan; the second Bill for Rs 8,000 was held till due date;
and the third Bill for Rs 10,000 was discounted for Rs 50.At maturity
all the Bills were dishonored. Give journal entries in the books of Ram
and the ledger accounts in the books of Hari, in respect of these
transactions. (CA) 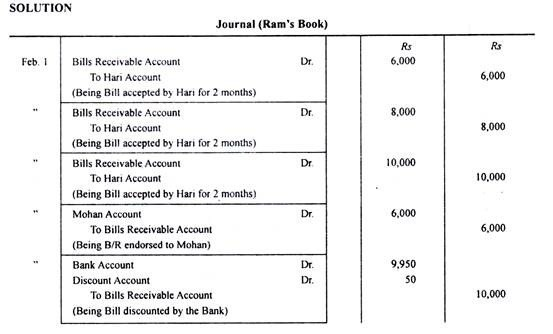 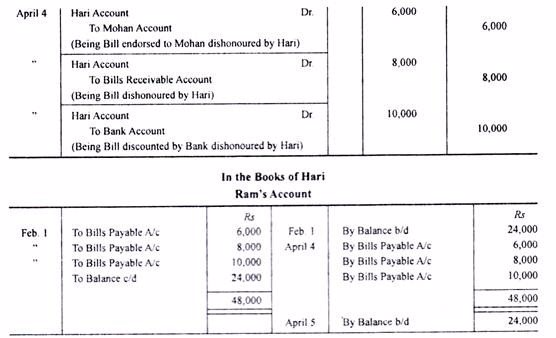