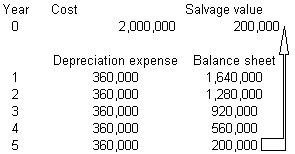 Straight-line
depreciation produces a constant depreciation expense. At the end of
the asset’s useful life, the asset is accounted for in the balance sheet
at its salvage value.
Computing Depreciation by Units of Output
Compute depreciation by Units of output
Unit-of-Production Depreciation
This
method provides for depreciation by means of a fixed rate per unit of
production. Under this method, one must first determine the cost per one
production unit and then multiply that cost per unit with the total
number of units the company produced within an accounting period to
determine its depreciation expense.
Estimated total units = the total units this machine can produce over its lifetime
Depreciation expense = depreciation per unit * number of units produced during an accounting period
Example 2
Example:
Company
ABC purchased a machine for $2 million that can produce 300,000
products over its useful life. The company estimates that this machine
has a salvage value of $200,000.

Unit-of-production
depreciation produces a variable depreciation expense and is more
reflective of production-to-cost (see matching principle).
At
the end of its useful life, the asset’s accumulated depreciation is
equal to its total cost minus its salvage value. Furthermore, its
accumulated production units equal the total estimated production
capacity. One of the drawbacks of this method is that if the units of
products decrease (due to slowing demand for the product, for example),
the depreciation expense also decreases. This results in an
overstatement of reported income and asset value.
Computing Depreciation by Declining Balance
Compute depreciation by Declining balance
Reducing Balance Depreciation Method
Reducing
Balance Method charges depreciation at a higher rate in the earlier
years of an asset. The amount of depreciation reduces as the life of the
asset progresses. Depreciation under reducing balance method may be
calculated as follows:
Depreciation per annum = (Net Book Value – Residual Value) x Rate%
Where:
Example 3
Example:
An asset has a useful life of 3 years.
Cost of the asset is $2,000.
Residual Value is $500.
Rate of depreciation is 50%.
Depreciation expense for the three years will be as follows:
*Under
reducing balance method, depreciation for the last year of the asset’s
useful life is the difference between net book value at the start of the
period and the estimated residual value. This is to ensure that
depreciation is charged in full.
As
you can see from the above example, depreciation expense under reducing
balance method progressively declines over the asset’s useful life.
Reducing
Balance Method is appropriate where an asset has a higher utility in
the earlier years of its life. Computer equipment for instance has
better functionality in its early years. Computer equipment also becomes
obsolete in a span of few years due to technological developments.
Using reducing balance method to depreciate computer equipment would
ensure that higher depreciation is charged in the earlier years of its
operation.
Example 4
Example
Depreciation to be expensed for the three years will be:
Computing Depreciation by Sum of the Years Digits
Compute depreciation by Sum of the years digits
Sum-of-Year Method:
Example 5
Example:
For
$2 million, Company ABC purchased a machine that will have an estimated
useful life of five years. The company also estimates that in five
years, the company will be able to sell it for $200,000 for scrap parts.
n! = 1+2+3+4+5 = 15 n = 5 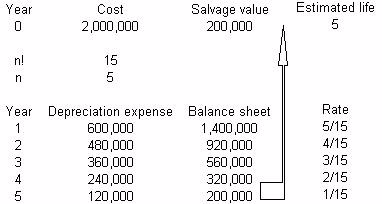