Scalar and Vector Quantities
Difference between Scalar and Vector Quantities
Distinguish between scalar and vector quantities
Scalar Quantities
These
are physical quantities which have magnitude only. Examples of scalar
quantities include mass, length, time, area, volume, density, distance,
speed, electric current and specific heat capacity.
Vector Quantities
These
are physical quantities which have both magnitude and direction.
Examples of vector quantities include displacement, velocity,
acceleration, force, pressure, retardation, and momentum.
Addition of Vectors Using Graphical Method
Add vectors using graphical method
Scalar physical quantities have magnitude only. Thus, they can be added, multiplied, divided, or subtracted from each other.
Example 1
If you add a volume of 40cm3 of water to a volume of 60cm3 of water, then you will get 100cm3 of water.
Vectors can be added, subtracted or multiplied conveniently with the help of a diagram.
Vectors Representation
A vector quantity can be represented on paper by a direct line segment.

Methods of Vector Addition
There are two methods that are used to sum up two vectors:
Triangle Method
A step-by-step method for applying the head-to-tail method to determine the sum of two or more vectors is given below.
1.Choose
a scale and indicate it on a sheet of paper. The best choice of scale
is one that will result in a diagram that is as large as possible, yet
fits on the sheet of paper.
2.Pick a starting location and draw the first vectorto scalein the indicated direction. Label the magnitude and direction of the scale on the diagram (e.g., SCALE: 1 cm = 20 m).
3.Starting from where the head of the first vector ends, draw the second vectorto scalein the indicated direction. Label the magnitude and direction of this vector on the diagram.
4.Draw the resultant from the tail of the first vector to the head of the last vector. Label this vector as Resultantor simplyR.
5.
Using a ruler, measure the length of the resultant and determine its
magnitude by converting to real units using the scale (4.4 cm x 20 m/1
cm = 88 m).
6.Measure the direction of the resultant using the counterclockwise convention.
Resultant vector: This
is the vector drawn from the starting point of the first vector to the
end point of the second vector which is the sum of two vectors. 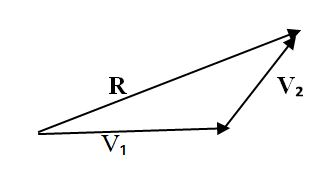 Where:
Example 2
Suppose a man walks starting from point A, a distance of 20m due North, and then 15m due East. Find his new position from A.
Solution
Use scale
1CM Represents 5m
Thus
20m due to North Indicates 4 cm
15m due to East Indicates 3cm.
Demonstration 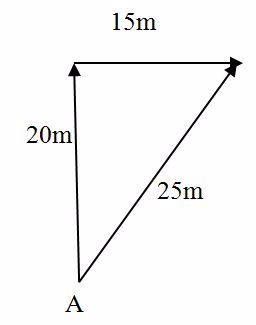 The position of D is represented by Vector AD of magnitude 25M or 5CM at angle of 36051”
Since
The Resultant displacement is 25m ad direction Q = 36º51”
The Triangle and Parallelogram Laws of Forces
State the triangle and parallelogram laws of forces
Triangle Law of Forces
Triangle
Law of Forces states that “If three forces are in equilibrium and two
of the forces are represented in magnitude and direction by two sides of
a triangle, then the third side of the triangle represents the third
force called resultant force.”
Example 3
A
block is pulled by a force of 4 N acting North wards and another force
3N acting North-East. Find resultant of these two forces.
Demonstration 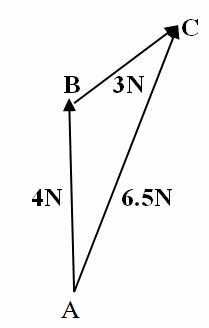 Scale
1Cm Represents 1N
Draw a line AB of 4cm to the North. Then, starting from B, the top vectorofAB, draw a line BC of 3 CM at 45oEast of North.
Join
the line AC and measure the length (AC = 6.5 cm) which represents 6.5N.
Hence, AC is the Resultant force of two forces 3N and 4N.
Parallelogram Method
In
this method, the two Vectors are drawn (usually to scale) with a common
starting point , If the lines representing the two vectors are made to
be sides of s parallelogram, then the sum of the two vectors will be the
diagonal of the parallelogram starting from the common point.
The
Parallelogram Law states that “If two vectors are represented by the
two sides given and the inclined angle between them, then the resultant
of the two vectors will be represented by the diagonal from their common
point of parallelogram formed by the two vectors”.
Example 4
Two
forces AB and AD of magnitude 40N and 60N respectively, are pulling a
body on a horizontal table. If the two forces make an angle of 30o between them find the resultant force on the body.
Solutiuon

Choose a scale.
1cm represents10N
Draw a line AB of 4cm
Draw a line AD of 6cm.
Make an angle of 30o between AB and AD. Complete the parallelogram ABCD using the two sides AB and include angle 30O.
Draw the lineAC with a length of9.7 cm, which is equivalent to 97 N.
The lineAC of the parallelogram ABCD represents the resultant force of AB and AD in magnitude and direction.
Example 5
Two
ropes, one 3m long and the other and 6m long, are tied to the ceiling
and their free ends are pulled by a force of 100N. Find the tension in
each rope if they make an angle of 30o between them.
Solution
1cm represents 1N
Thus
3cm = represent 3m
6cm = represents 6m
Demonstration

Tension, determined by parallelogram method, the length of diagonal using scale is 8.7 cm, which represents 100N force.
Thus.
Tension in 3m rope = 3 X 100 / 8.7 = 34.5N
Tension in 6m rope = 6 x 100 / 8.7 =69N
Tension force in 3m rope is 34.5N and in 6m rope is 69N.
Note: Equilibrant forcesare those that act on a body at rest and counteract the force pushing or pulling the body in the opposite direction.
Relative Motion
The Concept of Relative Motion
Explain the concept of relative motion
Relative motion is the motion of the body relative to the moving observer.
The Relative Velocity of two Bodies
Calculate the relative velocity of two bodies
Relative velocity (Vr) is the velocity relative to the moving observer.
CASE
1: If a bus in overtaking another a passenger in the slower bus sees
the overtaking bus as moving with a very small velocity.
CASE 2: If the passenger was in a stationary bus, then the velocity of the overtaking bus would appear to be greater.
CASE 3: If the observer is not stationary, then to find the velocity of a body B relative to body A add velocity of B to A.
Example 6
If
velocity of body B is VB and that of body A is VA, then the velocity of
B with respect to A , the relative velocity VBA is Given by:
VBA = VB + (-VA)
That is
VBA = VB – VA
NOTE:The relative velocity can be obtained Graphically by applying the Triangle or parallelogram method.
For same direction
VrBA = VB – (+VA)
= VB – VA ___________________ (I)
For different direction
VrBA = VB – (-VA)
VrBA = VB + VA _______________________ (II)
Example 7
A
man is swimming at 20 m/s across a river which is flowing at 10 m/s.
Find the resultant velocity of the man and his course if the man
attempted to swim perpendicular to the water current.
Solution
Scale
1cmrepresents 2m/s 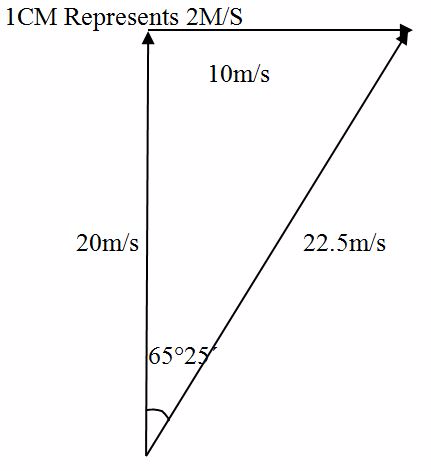 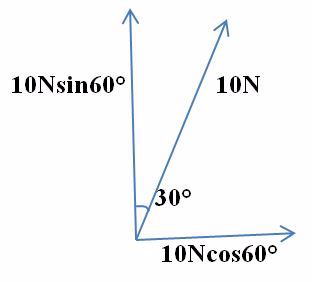 Friction force between two surface in contact exists only when there is relative motion between the two contacting surface.
The
friction between two surfaces exists because of the nature of the
surface of the bodies in contact. (Strictly speaking all surfaces are
rough because they are made up of peaks and valleys)
Demonstration
The
peak and valleys on the surfaces of bodies may be due to a random
arrangement of coarse particles, for example the surface of a gridding
stones.
Smooth surfaces exert almost no friction. What happens when two objects are pushed?
When
one body is pushed against another, the peaks of one surface have to
rise up over the peaks of the other surface. Hence opposition to motion
or friction occurs the force acting to restore the bodies to their
original position.
The Advantages and Disadvantages of Friction in Daily Life
Realize the advantages and disadvantages of friction in daily life
Advantages of Friction
Thefriction force has several advantages which includes the following:
Disadvantages of friction
Frictional force has several dis-advantages which includes the following:
Methods of Reducing Friction
Describe methods of reducing friction
Thedifferent methods ofreducing friction between surfaces includes the following:
Roller 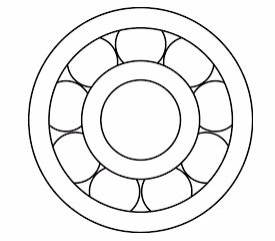 MINISTRY OF EDUCATION OF ZANZBZR (MOEZ) RELEASE OF EXAMINATION RESULTS 2017.