The Acceleration of a Body
Determine the acceleration of a body
Example 1
A
car starts from rest and accelerates to a velocity of 120m/s in one
minute. It then moves with this speed for 40seconds finally decelerates
to rest after another 2 minutes. Calculate;
Soln
1st stage; acceleration u =0, v = 120m/s,t1 =1min=60s
2nd stage; uniform vel u=v=120m/s,t2=40s
3rd stage; Deceleration u=120m/s,v=0,t3=2min=120s
Total distance, s T =3600+4800+7200 =15600m
Total time taken = 60 + 40 + 120 = 220s
from v = u + at
120 = 0 + 60a
60a = 120
a = 2m/s.
Average velocity = total distance/time
va = 15600/220
va = 71m/s
The Concept of Retardation
Explain the concept of retardation
Deceleration
(retardation) is the rate of decrease of velocity or is the decrease in
velocity per unit time. Uniform acceleration or retardation Is the one
whereby the rate of increase or decrease of velocity is constant or it
doesn’t change.
Note;
Equations of Uniformly Accelerated Motion
Equation of Uniformly Accelerated Motion
Derive equation of uniformly accelerated motion
There are three equations of motion;
Newton’s first equation of motion
It is given by; v = u + at
whereby;
PROOF;
From the formula of acceleration; a = (v-u)/t
Newton’s second equation of motion
It is given by 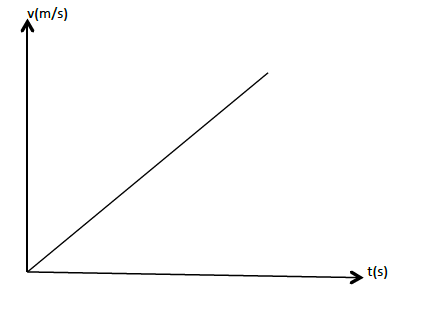 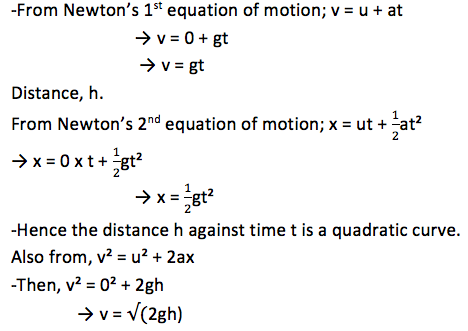 Case II
Consider
a body thrown vertically upwards from the ground with an initial
velocity u to a certain height h and then comes back to the ground after
time t. 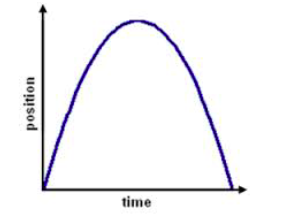 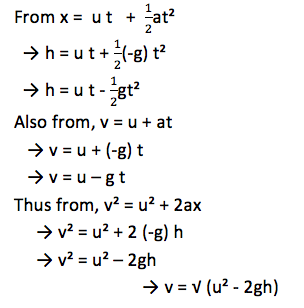 Acceleration due to Gravity
Determine acceleration due to gravity
A
simple pendulum is a small heavy body suspended by a light inextensible
string from a fixed support and it is normally used to determine
acceleration due to gravity.
It
is made by attaching a a long thread to a spherical ball called a
pendulum bob. The string is held at a fixed at a fixed support like two
pieces of wood held by a clamp and stand.
If
the bob is slightly displaced to position B,it swings to and from going
to C through O and back to B through O. When the pendulum complete one
cycle/revolution the time taken is called the period of oscillation, T. 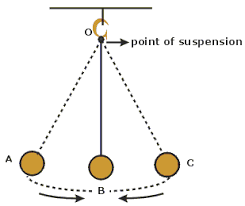 Definitions
From
the experiments, it has been observed that, changing the weight of the
bob and keeping the same length of pendulum, the period is always
constant provided that all swings are small though they may be different
in size.
The period T of the pendulum is given by;

Where; l = length of pendulum; g = acceleration due to gravity
Also

It follows that if we plot a graph of l against T. it is going to be a straight line with a slope g/4Π2and y –intercept equal to 0. 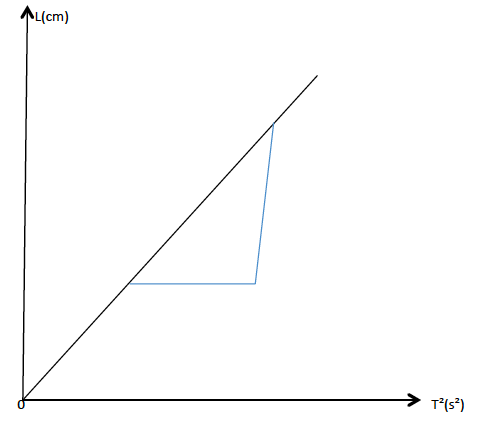 When
the bob is raised to point B it will gain potential energy and the bob
will swing due to the conservation of energy from potential to kinetic
energy.
If
the pendulum swung in vacuum the oscillations would have been
continuous. But practically, air friction causes losses of energy of the
pendulum bob. That is why after a certain time the oscillations cease.
The Application of Gravitational Force
Explain the application of gravitational force
Activity 2
Experiment
Aim: Determination of acceleration due to gravity by using the simple pendulum.
Materials and apparatus: A simple pendulum, stand, clamps and stop watch.
Procedures

Results
Observation
The graph obtained will be a straight line through the origin.
The slope of the graph is given by;

From this equation, the acceleration due to gravity can be computed easily.