1st law of Motion
The Concept of Inertia
Explain the concept of inertia
Inertia
is the ability of a resting body to resist motion or a moving body to
continue moving in a straight line when abruptly stopped.
The more mass a body has, the greater its inertia and vice versa is true.
Newton’s First Law of Motion
State Newton’s first law of Motion
Newton’s 1st law of motion states that “Everybody will continue in its state of rest or of uniform motion unless an external force acts upon it”
Verification of Newton’s First Law of Motion
Verify Newton’s first law of Motion
Activity 1
Experiment
Aim: To verify Newton’s 1st law of motion.
Materials and apparatus: Glass, manila card and small coin.
Procedures.
A
small coin is placed on a manila card and the card is positioned on top
of the glass such that the coin is directly positioned over the open
mouth of the bottle. 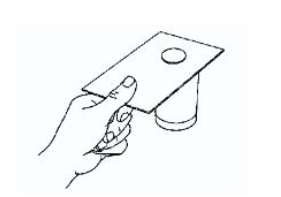 Flick the card at C. Make sure that the card is not tilted by moving the finger in the horizontal plane.
Observation:
When the card is flicked away quickly by finger, the coin drops neatly
into the glass. The coin dropped into the glass because there was no
force applied on it when the card was flipped.
Conclusion: The coin continued to be at rest as the card was flicked quickly. This experiment verify Newton’s 1st law of motion.
2nd law of Motion
The Concept of Linear Momentum
Explain concept of linear momentum
Linear momentum of a body is the product of mass and velocity of that body.
Momentum = Mass, m x Velocity, v
Hence P = mv
The SI Unit of Linear Momentum
State the SI unit of linear momentum
The unit of momentum is kilogram meter per second(kgm/s)
Linear Momentum
Determine linear momentum
When
two bodies, a heavy one and the light one are acted upon by an external
force at the same time(collide) the light body builds up a higher
velocity than the heavy one but the momentum they gain remain the same
in both cases.
i.e
Momentum before collision = Momentum after collision. This is what we
call the conservation of momentum and is described by Newton’s 2nd law
of motion.
Newton’s Second Law of Motion
State Newton’s second law of Motion
Newton’s 2nd law of motion states that “The rate of change of momentum is proportional to the applied force and it takes place in the direction of a force”
Consider
a body of mass, (m) acted by an external force (f) from an initial
velocity (u) to the final velocity (v) within a time interval (t).
Change of momentum = mv – mu 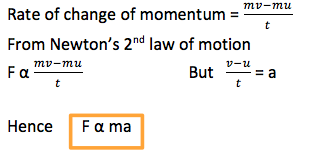 Hence the Newton’s 2nd law of motion can be summarized as;
“The
force is directly proportional to acceleration of the object and the
acceleration of the same body is inversely proportional to its mass”
F α ma
F = kma but k = 1
Hence F = ma
If a mass of 1kg is accelerated with an acceleration of 1m/sÇ then the force of 1N is said to be acting on it.
Newton is the force which when acting on a body of mass 1kg it produces an acceleration of 1m/s..
Verification of Newton’s Second Law of Motion
Verify Newton’s second law of Motion
A
trolley experiences an acceleration when an external force is applied
to it. The aim of this datalogging experiment is explore the
relationship between the magnitudes of the external force and the
resulting acceleration.
Apparatus and materials
Take
care when masses fall to the floor. Use a box or tray lined with bubble
wrap (or similar) under heavy objects being lifted. This will prevent
toes or fingers from being in the danger zone. 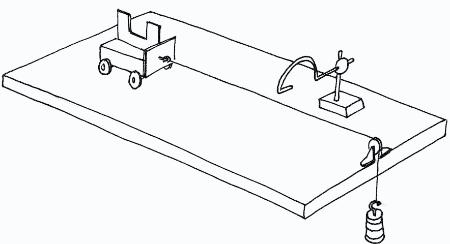 Inelastic collision
Is
the type of collision whereby all bodies move with the same velocity
after collision. This velocity is known as common velocity. In this type
of collision energy is not conserved, only momentum is conserved.

Impulse is the change of momentum which is given asm the product of force and the time taken to change momentum.